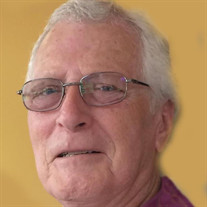 Glenn E. “Eddie” Bixler, 79, of Hanover, husband of Barbara A. “Barbie” Miller Bixler, passed away on Thursday, June 11, 2020 at home surrounded by his family. Born on Saturday, April 19, 1941 in Lineboro, MD, he was a son of the late Glenn E. and Catherine Krug Bixler. A 1959 graduate of Eichelberger High School, he retired in 2009 from ESAB Welding and Cutting Products after 40 years of service. He was a member of St. Joseph Catholic Church, the Hanover Home Association, Hanover Eagles Aerie 1406, AmVets Post #22 and the VFW Post #2506. Glenn enjoyed sitting on the front porch and swinging on the swing that he received as a Father's Day gift while drinking IPA's. He was a country music fan but mostly loved spending time with his family. In addition to his wife of 58 years, survivors include, five children, Donald “Don” Bixler and his wife, Sherry, Donna Bixler, all of Hanover, Bonnie Showvaker and her husband, Tracy, of Littlestown, Jeanne Dubs and her husband, Dru, and Robert “Rob” Bixler all of Hanover; ten grandchildren, Katie, Thomas, Cory, Lindsay, Jake, Kelsey, Justin, Lucas, Tessa and Mikey; nine great-grandchildren, Elyse, Ryder, Aubrey, Breydon, Zurich, Charlotte, Teagan, Parker, Brooke and another great-granddaughter expected soon; a brother, Dave Bixler and his wife, Mary; three sisters, Linda Cromer and her husband, Rodney, Loretta Barnes and her husband, Mark, and Lucy Barnhart and her husband, Wayne; and numerous nieces and nephews. He was preceded in death by his parents and a brother, Samuel P. Bixler. A service for Glenn will be held privately. In lieu of flowers, memorial contributions may be made to the National Brain Tumor Society, 55 Chapel Street-Suite 200, Newton, MA 02458 – or at BrainTumor.org, or to the American Lung Association, 3001 Gettysburg Road, Camp Hill, PA 17011.

The family of Glenn E. Bixler created this Life Tributes page to make it easy to share your memories.

Send flowers to the Bixler family.