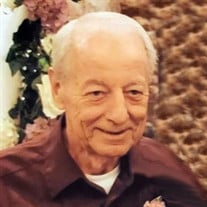 Gerald E. “Jerry” Groft, 84, of York, passed away peacefully on Thursday, January 20, 2022 at home with his daughters by his side. Born on Thursday, May 6, 1937 in Hanover, he was a son of the late Francis P. and Perpetua Smith Groft. He was also preceded in death by his wife of nearly 25 years, Patricia Ann (Bohr) Groft, who died in 2001; and two brothers, Francis P. “Sonny” Groft and Charles R. Groft. Jerry proudly served his country in the US Marine Corps and US Air Force. He was the owner and operator of Jerry Groft’s Auto Sales and later retired as the service manager for the former Baugher Motors. He was a member of St. Joseph Catholic Church and the AmVets Post #22, where he was a past president. Survivors include two daughters, Kathy Reed and her husband, Doug, of York and Kim Learn and her husband, Russ, of Littlestown; two step-sons, Rick Baublitz and Dave Baublitz and his wife, Suki; a step-daughter, Cindy Eberman; six grandchildren, Matthew Reed and his wife, Katie, Aaron Reed, Bryan Learn and his wife, Erica, Emily Clark, Danielle Hoffman and her husband, Ron, and Stephen Learn; and ten great-grandchildren, James, John, and Martin Reed, Noah Learn, Liam Clark, and Alazay, Laytan, Brooklyn, Malakye, and Elyjah Hoffman. Following cremation, a graveside service will be held at 1:00 PM Wednesday, January 26, 2022 at Rest Haven Cemetery with Pastor Jeremiah Herbert officiating. In lieu of flowers, memorial contributions may be made to St. Jude’s Children’s Research Hospital, 501 St. Jude Place, Memphis, TN 38105.

The family of Gerald E. "Jerry" Groft created this Life Tributes page to make it easy to share your memories.

Send flowers to the Groft family.