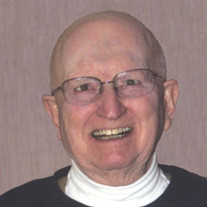 Elven L. Chronister, Jr., 83, of Hanover, loving husband of Betty Reichart Chronister, entered into God’s eternal care on Tuesday, October 2, 2018 at Homewood at Plum Creek. Born on Thursday, March 14, 1935 in Gettysburg, he was the son of the late Elven L. Chronister, Sr. and Alda Zimmerman Chronister. In 1961, he received his Bachelor’s degree in Education from Shippensburg University and later earned his Master’s in Education from Penn State University. He served with the US Army and was a member of Trinity United Church of Christ. Elven taught in the Littlestown Public School District for 32 years, where he also coached the junior high volleyball and football teams as well as drove a school bus. He participated in the Hanover Liberty Day Activities where he received numerous awards in the horseshoe competition. Also active with the York County and Pennsylvania State Senior Olympics, he won a gold medal in shuffleboard in the National Senior Olympics in 2005. In addition to his wife of 56 years, survivors include five children, Scott L. Chronister of Ashburn, VA, Cathy J. Bittinger and her husband, Andrew, of Reading, Julie A. Jones and her husband, Robert, of Duluth, GA, Chris W. Chronister and his wife, Kim, of Alachua, FL, and J.B. Chronister and his wife, Lesley, of West Chester, OH; 14 grandchildren; and a sister, Peggy M. Bear and her husband, Dennis, of Gettysburg. He was preceded in death by a sister, Shirley Miller. A private service is being planned. In lieu of flowers, memorial contributions may be made to the Alzheimer’s Association; 2595 Interstate Drive – Suite 100, Harrisburg, PA 17110.

The family of Elven L. Chronister Jr. created this Life Tributes page to make it easy to share your memories.

Send flowers to the Chronister family.