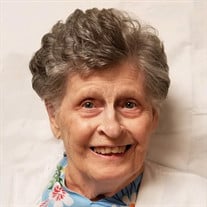 Eleanor M. Casey of Silver Spring, MD passed peacefully into God&#8217;s welcome arms with her family&#8217;s blessings on Saturday, February 1 at Homewood at Plum Creek, Hanover, PA, at the age of 95, surrounded by her family during her last... View Obituary & Service Information

The family of Eleanor M. "Ellie" Casey created this Life Tributes page to make it easy to share your memories.

Send flowers to the Casey family.