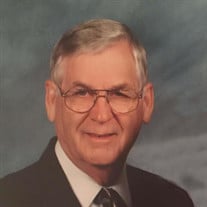 Edwin A. ”Steady Eddy” Krumrine, 90, of Hanover, entered into God’s eternal care on Saturday, April 16, 2022 at UPMC Hanover. Born on Thursday, June 25, 1931 in Westminster, MD, he was a son of the late Lester A. and Norma Crowel Krumrine. He was also preceded in death by his wife of 52 years, Joan L. “Jo” Krumrine, who died in 2010. Ed was a retired driver with L&H Trucking, having logged more than 4 million miles without an accident. He served with the US Army during the Korean War and was a member of Mount Carmel Lutheran Church and the AmVets Post #22. He enjoyed watching NASCAR races and football. Survivors include three daughters, Kelly Neubecker of Simla, CO, Donna Clouser and Cathy Krumrine; a son, Jay Krumrine, all of Hanover; and a step-son, Charlie Baker of New Oxford; a step-daughter, Sue Leaman of Dover; a brother, Harold Krumrine of Littlestown; two sisters, Janice Keller and Norma Jean Norton, both of Westminster, MD; six grandchildren and six great-grandchildren. The funeral will be held at 11 AM Thursday, April 21, 2022 at Mount Carmel Lutheran Church with The Rev. David L. DeLong officiating. Burial will follow in the church cemetery with military honors being rendered by the Hanover Allied Veterans Honor Guard. A time to celebrate Ed’s life will be from 6 to 8 PM Wednesday at Panebaker Funeral Home and at the church one hour prior to the service. In lieu of flowers, memorial contributions may be made to the Mount Carmel Lutheran Church, 1398 Moulstown Road, Hanover, PA 17331.

The family of Edwin A. Krumrine created this Life Tributes page to make it easy to share your memories.

Send flowers to the Krumrine family.