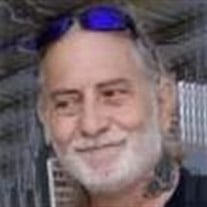 Edward M. “Eddie” Jury, 60, of Abbottstown, loving husband of Deborah L. Jury, went to be in the presence of the Lord on Friday, December 20, 2019 at WellSpan York Hospital. Born on Wednesday, January 28, 1959, he was a son of the late Joseph Jury and Adolfine Jaborek Staub. He is also preceded in death by a brother, Anthony Jury; three aunts; and two uncles. A lover of motorcycles, Eddie was an active member of the Freedom Biker Church of York. In addition to his wife, survivors include a daughter, Jodi Purdy of York; two grandchildren, Kasi Weaver of York, and Devon Wynegar of Red Lion; one brother, Frank Jury of Glenville; a sister, Christine Duncan and her husband, Wayne, of Hanover; and his step-father, Steve Staub of Glenville. The funeral will be held at 11 AM on Thursday, December 26, 2019 at Calvary Bible Church, 603 Wilson Avenue, Hanover with Pastor Jim Quoss officiating. Burial will follow in St. Joseph Cemetery. The family will receive friends at the church one hour prior to the service. In lieu of flowers, memorial contributions may be made to Freedom Biker Church of York, 2550 Pine Grove Road, York, PA 17403.

The family of Edward M. "Eddie" Jury created this Life Tributes page to make it easy to share your memories.

Send flowers to the Jury family.