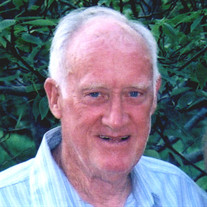 Edward Eugene “Tom” Williams, 86, of Hanover, husband of Shirley Mather Williams of Hanover, died Wednesday, January 29, 2020 at UPMC Hanover Hospital. Born on Wednesday, April 26, 1933 in Maggie Valley, NC, he was a son of the late Charles A. and Burdine Clement Williams. He was also preceded in death by a daughter, Karen L. Williams; two sisters, Jewell Richard and Paulette Raphel; and a brother, Charles E. Williams. He served in the 101st Airborne Division of the United States Army during the Korean War. Skilled with his hands, he was a mason by trade and owned and operated Edward E. Williams Masonry. He spent years serving on the Homewood Chapel Altar Guild, loved to play cards, and devoted himself to the men’s coffee group. In addition to his wife of nearly 63 years, he is survived by a son, Thomas E. “Tommy” Williams; a grandson, Jason Williams; a granddaughter, Jennifer Frederick; two great-grandchildren, Caitlyn and Gavin; and a sister, Ann Roach. The funeral will be held at 10 AM Monday, February 3, 2020 at Homewood Chapel at Plum Creek with The Rev. Dr. Joel B. Hummel officiating. The family will receive friends one hour prior to the service. A graveside service will be at 1:30 PM Monday at Evergreen Memorial Gardens in Finksburg, MD. Memorial contributions may be made to Homewood at Plum Creek Benevolence Fund, 425 Westminster Avenue, Hanover, PA 17331.

The family of Edward E. "Tom" Williams created this Life Tributes page to make it easy to share your memories.