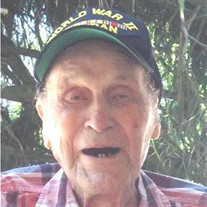 Earl K. “Spark” Weisensale, 98, went to be with his Savior Jesus Christ on Wednesday, April 11, 2018 at his home. Born on Wednesday, June 25, 1919 in Hanover, he was a son of the late John Clinton Wisensale and Emma Mae Trone Wisensale. He was also preceded in death by his wife of 75 years, Pauline Geiman Weisensale, who died in 2016; five brothers; and one sister. Earl was a US Army veteran of World War II, having served in the South Pacific Theater of Operations for three years. He retired from United Telephone after many years of employment and was a member of St. David’s Lutheran Church where he served on the church council for 30+ years. He was a 52 year member of the Lions Club, where he received the Melvin Jones Fellowship award for contributions to worldwide humanitarian needs, and was a President of the Penn Township Lions which he joined the year of its founding. He served on the South Western School District Board of Directors, and he was a member of the Hanover Garden Club. Earl excelled in high school athletics, especially football and track and field. He enjoyed hunting and fishing and in his later years was a cook at several hunting cabins. He coached service club baseball teams for a number of years as well as St David’s softball team. He was an avid Orioles fan from the time they came to Baltimore until the day he died. He had many hobbies and loved making things: from turquoise jewelry and wine, to martin houses and wooden benches. He loved to travel to the Southwest, making numerous trips with his wife to Arizona and Nevada. He was energetic. One could see him chopping wood, gardening and cutting grass well into his eighties. He was always there to help when his kids needed him. Survivors include three children, Ellen L. Hostetter and her husband, Carl, of Dover, Kenneth M. Weisensale and his wife, Sharon, of Langhorne, and Jay A. Weisensale and his wife, Anne, of Hanover; five grandchildren, Christopher, Matthew, Devon, Izetta, and Hannah; eight great-grandchildren and a 1968 foreign exchange student from Iceland, Thorhallur Maack. Friends and family may call for fellowship and to share memories and a light supper at 5:00 pm followed by a memorial service at 7:00 pm on Friday, June 22, 2018 at St. David's Evangelical Lutheran Church. In lieu of flowers, memorial contributions may be made to St. David’s Evangelical Lutheran Church, 1032 Musselman Road, Hanover, PA 17331.

The family of Earl "Sparky" Weisensale created this Life Tributes page to make it easy to share your memories.

Send flowers to the Weisensale family.