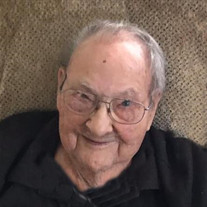 Earl Henry Hertz, Sr., 91, of Hanover, passed away peacefully on Monday, August 12, 2019 at UPMC Hanover Hospital. Born on Saturday, July 28, 1928 in Hanover, he was a son of the late Joseph H. and Cora M. Scheivert Hertz. He was also preceded in death by his wife of 54 years, Dorothy H. Hertz, who died in 2005; and five siblings, Roger Hertz, Kathleen Hertz Gotwalt, Raymond Hertz, Louise Hertz Heare, and his twin brother, Merle Hertz. A graduate of Delone Catholic High School, he retired from Black & Decker after more than 30 years of service. Following his retirement, he owned and operated Hertz Small Engine Repair. Earl proudly served his country with the US Army during the Korean War. He was a member of St. Joseph Catholic Church, was a Past Grand Knight of the Knights of Columbus McSherrystown #2551 and member of the Cyril J. Allwine Assembly of the Fourth Degree. He was also a member of the Veterans of Foreign Wars Post #2506, Harold H. Bair American Legion #14, AmVets Post #22, Hanover Eagles FOW #1406, the Hanover and McSherrystown Home Associations, and was a life member of the Boy Scouts of America Troop #103. Survivors include eight children, Earl Hertz, Jr. of Hanover, Julie Bowers of York, Sue Krug of Hanover, John Hertz of Abbottstown, Linda Sanders of Fayetteville, Joseph Hertz of Littlestown, David Hertz of Summerall, MS, and Ann Kress of Hanover; 15 grandchildren, Michael, Jessica, Joshua, Kevin, Brady, Tatiana, Max, Zachary, Rachael, Jason, Christopher, Kristen, Mitchell, Shannon and Matthew; six great-grandchildren and several nieces and nephews. A Mass of Christian Burial will be celebrated at 11 AM Thursday, August 15, 2019 at St. Joseph Catholic Church, 5125 Grandview Road, Hanover. Burial will follow in St. Joseph’s Cemetery. The family will receive friends at viewings to be held from 6 to 8 PM Wednesday at Panebaker Funeral Home, 311 Broadway, Hanover and at the church one hour prior to the service. A recitation of the Rosary will be said at 8 PM Wednesday at the funeral home. In lieu of flowers, memorial contributions may be made to a charity of the donor’s choice.

Earl Henry Hertz, Sr., 91, of Hanover, passed away peacefully on Monday, August 12, 2019 at UPMC Hanover Hospital. Born on Saturday, July 28, 1928 in Hanover, he was a son of the late Joseph H. and Cora M. Scheivert Hertz. He was also preceded... View Obituary & Service Information

The family of Earl H. Hertz Sr. created this Life Tributes page to make it easy to share your memories.

Send flowers to the Hertz family.