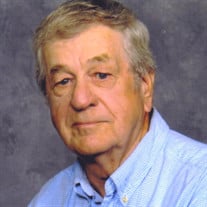 Donald L. Walton, 86, of Hanover, entered into God’s eternal care on Wednesday, April 18, 2018 at his home. Born on Monday, February 8, 1932 in Kralltown, PA, he was a son of the late Harvey A. and Beatrice Eisenhart Walton. He was also preceded in death by his first wife of three and a half years, Jacquelyn Hufnagle Walton, who died in 1959; his second wife of 41 years, Beverly Frock Walton, who died in 2005; and a sister, Dorothy M. Leister. A 1950 graduate of Eichelberger High School, Donald served in the U.S. Air Force as a radio mechanic with four years of service, three of which had been spent in Germany. In 1997, he retired from Cam Innovation, Inc. where he had been employed as a Mechanical Design Engineer. In his earlier working career, he had been employed at the former Hanover Industrial Machine Company “HIMCO”, where he dedicated 28 years of service and R.H. Sheppard Co., Inc. In more recent years, he had been a contingent for UPMC Pinnacle- Hanover. Donald coached Little League Baseball and took great pleasure in hunting, fishing, and gardening. Known as a master craftsman, he enjoyed restoring antiques of all kinds. But most of all, he loved spending time with his family. Donald was an active member of the former St. Paul Lutheran Church in McSherrystown where he had been a member for over 60 years. He took many responsibilities on at the church such as serving on the church council, maintaining the church property, and serving as a council officer. He was also a member of the Hanover Elks Lodge #763, York-Adams Game & Fish Association, and The American Legion Post #14 of Hanover. He was also a former member of the Hanover AMVETS Post #22, the Hanover VFW Post #2506, the Republican Club of Hanover, and The Bell Club of America. As a young boy, Donald had also been a member the Adams County 4-H “Baby Beef” club. Survivors include a son, Mitchell A. Walton and his wife, Elaine, of East Berlin; two daughters, Jody A. Jacoby and her husband, Jimmy, and Julie Walton, all of Hanover; five grandchildren, Luke, Katie, Michele, Erik, and Daniel; five great-grandchildren, Alexis, Noah, Colin, Jacob, and Lily; three brothers, Kenneth E. Walton of York, Richard A. Walton of Phoenix, AZ, and Larry G. Walton of Hanover; and a sister, Darlene A. Lucciotti of Gettysburg. The family would like to sincerely thank the staff of Caring Hospice Services of Lancaster for the wonderful level of care that had been provided to Donald. A funeral will be held at 11am on Wednesday, April 25, 2018 at St. Mark Lutheran Church, 129 Charles Street, Hanover, with The Rev. Kirk A. Griffin officiating. Burial will follow in Rest Haven Cemetery with military honors rendered by the Hanover Allied Veterans Honor Guard. A viewing will be held from 6 to 8pm on Tuesday, April 24, 2018 at Panebaker Funeral Home & Cremation Care Center, Inc., 311 Broadway Hanover. In memory of Donald, memorial contributions may be made to the American Cancer Society, 924 Colonial Avenue, Suite N, York, PA 17403 or to the Wounded Warrior Project, P.O. Box 758517, Topeka, KS 66675-8517.

The family of Donald L. Walton created this Life Tributes page to make it easy to share your memories.

Send flowers to the Walton family.