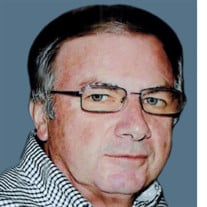 Donald L. “Donnie” Gladfelter, 71, of Hanover, beloved husband of Shirley M. (McWilliams) Gladfelter, entered into God’s eternal care on Saturday, July 11, 2020 at UPMC Pinnacle- Hanover. Born on Wednesday, December 29, 1948 in Hanover, he was a son of the late Charles Edward and Mary Mae Cooper Gladfelter. He was also preceded in death by his first wife, Ok Cha “Jane” Gladfelter, who died in 2009. A proud US Army veteran, Donnie served two years in active duty and was stationed in Korea. A 1966 graduate of South Western High School, he worked as a route driver for Utz Quality Foods for 35 years. Donnie was a member of St. Jacob’s (Stone) United Church of Christ, the Home Association of McSherrystown, Am Vets Post #22, Hanover Republican Club, McSherrystown Loyal Order of Moose Lodge #720, Hanover Fraternal Order of Eagles Aerie #1406, and the Hanover Home Association. He was a lifetime member of the Harold H. Bair American Legion Post #14, McSherrystown Fish and Game, and the Hanover VFW Post #2506. He enjoyed bowling, horse racing and playing darts. In addition to his wife of seven years, survivors include a son, Bret Gladfelter, his wife, Heather, and their two children, Mason and Addison; a sister, Nancy Monath and her husband, Jim; three brothers, Bob Gladfelter, Richard Gladfelter and his wife, Linda, and Kevin Gladfelter and his wife, Linda; three step-children, Jeffrey, Steven, and Jessica and their families; and numerous nieces and nephews. The family will receive friends at a viewing to be held from 6 to 8 PM on Thursday, July 16, 2020 at Panebaker Funeral Home. Burial will be private. In compliance with heath and public safety directives, those attending the service will be required to wear masks and attendance inside the funeral home will be limited to 25 people at a time. Memorial contributions may be made to the American Cancer Society, 1004 N. Juniata Street, Hollidaysburg, PA 16648, in honor of Donnie’s son, Bret.

The family of Donald L. "Donnie" Gladfelter created this Life Tributes page to make it easy to share your memories.

Send flowers to the Gladfelter family.