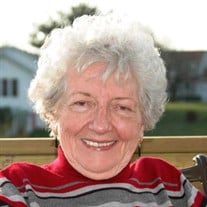 Dolores Jean Brillos born on January 16, 1929, stepped through the Gates of Glory, on Sunday, August 29, 2021 at the age of 92. Dolores, daughter of the late Carl and Lillian (Bown) Ryan was born and grew up in Hannibal, Missouri. She was the oldest of 3 sisters. She graduated from Hannibal High School in 1947. She met the love of her life, George M. Brillos, and they were married August 27, 1950. They were blessed over the years with four daughters, Debbie, Cheryl, Mary and Janet. She was preceded in death by George, her husband of 45 years and two sisters, Mary Ryan and Norma Ledford. Dolores was a devoted wife and mother and considered her family her greatest blessing. She was an active member of Colonial Baptist Church in Randallstown, Maryland where she taught Sunday school, served as a senior adult leader, and served in the Girls’ Auxiliary. She was also on the board of the Baptist Family and Children’s Services for many years. Gifted with her hands, she sewed kneelers for the Washington National Cathedral in Washington, D.C. Nana, as was affectionately called by her grandchildren, raised her family with the love for the Lord. Her life reflected what was in her heart. She leaves these family members to cherish her loving memories: Sister-in-law: Jacque Brillos Four daughters and sons-in-law: Debbie and Jim Bowles of Indianapolis, Indiana, Cheryl and Dan Clymer of Sykesville, Maryland, Mary and Scott Decker of Hanover, Pennsylvania and Janet and Bob Tubbs of Laurel, Maryland Ten grandchildren, Amy Bowles, Christopher Burns, Andrea White, Shaun Burns, Amanda Blizzard, Erin Shugars, Anna Williams, Holly Decker, Scott Decker Jr., and Benjamin Tubbs Twenty-seven great-grandchildren and a great-great-granddaughter. A funeral service will be held at 11AM on Friday, September 3, 2021, at Panebaker Funeral Home & Cremation Care Center, Inc, 311 Broadway, Hanover, with Pastor Mark Klimovitz officiating. The family will receive friends at a viewing one hour prior. Burial will be held at Grandview Burial Park in Hannibal, Missouri on Wednesday, September 8, 2021 at 11AM. The funeral service will be live streamed on her memorial tribute page at www.panebakerfuneralhome.com starting at 11:00 AM on Friday, September 3, 2021. Memorial contributions may be made to the Homewood Foundation, 425 Westminster Avenue, Hanover, PA 17331 or the International Mission Board- Southern Baptist Convention, 3806 Monument Avenue, Richmond, VA 23230.

Dolores Jean Brillos born on January 16, 1929, stepped through the Gates of Glory, on Sunday, August 29, 2021 at the age of 92. Dolores, daughter of the late Carl and Lillian (Bown) Ryan was born and grew up in Hannibal, Missouri. She was the... View Obituary & Service Information

The family of Dolores Jean Brillos created this Life Tributes page to make it easy to share your memories.

Send flowers to the Brillos family.