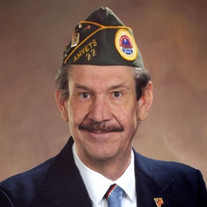 Dennis G. Warehime, 63, of Hanover, beloved husband of Takako “Tina” Warehime, passed away peacefully and entered into God’s eternal care on Saturday, April 17, 2021 at his home with his family by his side. Born on Sunday, May 26, 1957, he was the eldest son of Joan Shaffer Cumberland, of Westminster, MD, and the late Gerald Warehime; and step-son of, Elizabeth “Liz” Warehime, of Westminster. He is also preceded in death by a brother, Michael Warehime who died in 2018; and a nephew, Kevin Warehime. A 1975 graduate of Westminster High School in Maryland, Dennis joined the United States Navy at 17 years old. During his 13 year military career, with his dedicated wife by his side, he frequently moved while serving his country at Naval stations in Mississippi, Alabama, California, Japan, and many others. Dennis worked as a Naval Construction planner in Charlie Company. Following his honorable discharge from the Navy, he moved to Hanover to be close to family. He was a life member of the Harold H. Bair American Legion Post #14 and served as Commander and past Chaplain for the Hanover AmVets Post #22. An avid outdoorsman he enjoyed hunting and fishing. In addition to his wife of 43 years, his mother, and step-mother, he is survived by three brothers, Steve Warehime and his wife, Terri, Craig Warehime, and Tim Warehime and his wife, Linda; a niece, Tamara Warehime; a nephew, Brandon Warehime; a sister-in-law, Sonya Hook; and a step-sister, Jennifer Warehime. A memorial service will be held at 1PM on Friday, April 23, 2021 at Panebaker Funeral Home & Cremation Care Center, Inc., 311 Broadway, Hanover, with the Rev. Gregory A. Rapp officiating. The family will receive friends 11Am to 1PM on Friday. The memorial service will be live streamed beginning at 1PM. Inurnment will follow in Mount Olivet Cemetery with military honors being rendered by the Hanover Allied Veterans Honor Guard. In compliance with health and public safety directives, those attending will be required to wear masks, be socially distanced and attendance inside the funeral home will be limited. In lieu of flowers, memorial contributions may be made to the AmVets Post #22, 206 Broadway, Hanover, PA 17331.

The family of Dennis G. Warehime created this Life Tributes page to make it easy to share your memories.

Send flowers to the Warehime family.