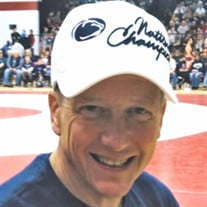 David Charles Conaway, 63, of Abbottstown, devoted husband of Jackie Lannen Conaway, celebrated his freedom of early onset Alzheimer’s Disease and Lewy Body Dementia on Sunday, July 4, 2021 amidst the fireworks and the love of his family at his side in his home. He was affectionately called by many as Coach Conaway or just Coach, but more importantly he was a husband, a superhero dad of three, proud pappy, and a devoted friend. Dave absolutely adored his wife Jackie. After retiring they were able to travel the country to follow their son and their favorite wrestling team, Penn State. A career educator, Coach Conaway retired from the Conewago Valley School District after 33 years where he taught and coached. He was a graduate of Philipsburg-Osceola Area High School, Clarion University where he obtained a Bachelor of Science in Education degree. Dave served as the assistant wrestling coach at New Oxford from 1986-1992. He then served as head coach for the next 22 seasons, retiring in 2013. Dave went beyond his duties as a coach and served his community by acting as a second father figure to his athletes. Instilling his athletes with Christ-like values in order to handle adversity was very important to him. Dave cherished all of the special relationships he developed with each wrestler and coach. Dave made an everlasting impact in the wrestling world as demonstrated by his accomplishments within the sport. Most recently he was inducted into the New Oxford Athletic Hall of Fame. In 2018 he was inducted into the District III wrestling coaches hall of fame. Dave was a born again Christian and his well worn Bible was his compass. Dave attended church regularly. He taught Sunday school and was a major Christian influence on many young lives. He lived each day as a light to so many. During the summer of 1980 his 2 passions collided; witnessing & wrestling. He embarked on a 6 week, 6 country journey wrestling for Athletes in Action on a South America tour. Dave Conaway is predeceased by his parents Phil and Catherine “Bea” Conaway, and his sister Linda Mayes. He leaves to cherish his memory his loving wife, Jackie (Lannen) Conaway and his three children Tiffanie Garman (Denton), Brittany Barnett (Matt), Jordan Conaway (Haley Eash). He is also best known as Pappy to four granddaughters Ava & Mya Garman, and Serenity and Oakley Barnett that he absolutely adored. A celebration of his life will be held on Saturday, November 13, 2021 from 2-3pm at the First Church of God, 600 Fairview Drive, Hanover, PA. A memorial service will follow at 3pm. Memorial contributions may be made to the Coach Dave Conaway Tribute Fund, Adams County Community Foundation, 25 S. 4th Street Gettysburg, PA 17325 or at Adamscountycf.org Please consider joining the family's facebook group as well: https://www.facebook.com/groups/530222854002959

David Charles Conaway, 63, of Abbottstown, devoted husband of Jackie Lannen Conaway, celebrated his freedom of early onset Alzheimer&#8217;s Disease and Lewy Body Dementia on Sunday, July 4, 2021 amidst the fireworks and the love of his family... View Obituary & Service Information

The family of David Charles Conaway created this Life Tributes page to make it easy to share your memories.

Send flowers to the Conaway family.