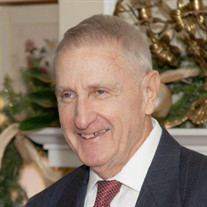 David J. Armstrong, 79, of Hanover, husband of Madge M. Armstrong, passed away on Wednesday, February 19, 2020 at his home. Born on Friday, March 22, 1940 in Clearfield, PA, he was a son of the late James E. and Sarah Armstrong Ardery. A 1958 graduate of Clearfield High School, he received his Bachelor’s degree from Hampton University in 1972 and his Master’s degree from Long Island University in 1978. David was a Vietnam veteran and retired from the US Army as a Major in 1983. Following his retirement, he was a financial counselor until 1996. He enjoyed nature and did volunteer work for the Pennsylvania Chapter of the American Chestnut Foundation and established four chestnut orchards at Codorus State Park. He had a fondness for his pets, but his greatest joy was spending time with his family, especially his daughters, grandchildren and step-grandchildren. Surviving, in addition to his wife with whom he would have celebrated 50 years of marriage in June, are two daughters, Suzie Armstrong and her husband, Bill Connell, of Newport News, VA, and Beth Lutz and her husband, Greg, of York; two grandchildren, Eleah and Thomas Steiner; and three brothers, Edward Armstrong of Prattville, AL, John Fuge of State College and Michael Ardery of West Virginia. Following cremation, a memorial service will be held at 11 AM Monday, February 24, 2020 at Emmanuel United Church of Christ, 124 Broadway, Hanover with The Rev. Russell Clark officiating. The family will receive friends following the service. In lieu of flowers, memorial contributions may be made to the PA Chapter of the American Chestnut Foundation, Penn State University, 206 Forest Resources Lab, University Park, PA 16802-4704.

The family of David J. Armstrong created this Life Tributes page to make it easy to share your memories.

Send flowers to the Armstrong family.