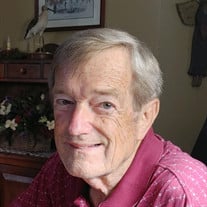 David S. “Dave” Albrecht, 76, of New Oxford, loving husband of Rebecca “Becky” Leister Albrecht, fought his battle with cancer in a dignified and graceful way but succumbed the morning of Mother’s Day, May 9, 2021. Dave was born on Monday, September 11, 1944, in Philadelphia. He was a graduate of Haverford High School in Havertown, PA, near Philadelphia. He then attended Ricks College in Rexburg, ID, and Brigham Young University in Provo, UT, where he studied history and archaeology. Dave was employed in the advertising sales industry for almost 50 years. Dave often spoke fondly of how his interest in the outdoors began at a young age while harvesting maple syrup with his aunt in Vermont. He became an avid outdoorsman and he enjoyed bicycling, skiing, traveling, playing golf and pickleball. He shared his love of the outdoors with his family, taking them along on countless outdoor adventures. Dave was quite the handyman, helping friends and family with all manner of projects - from splitting logs to building his grandsons a large wooden play gym to acting as General Contractor for their new home on Hoff Road in Hanover, PA. Dave was preceded in death by his father, Blair Albrecht, his mother, Deborah Smedley Albrecht, and brother, Charles Albrecht. In addition to Becky, his wife of 45 years, he is survived by two daughters - Sandi Lee Albrecht Caffarello and her husband Vincent of Hamilton, NJ, and Lisa Rebecca Mauss of Richmond, VA. He is also survived by two grandsons, Vincent Caffarello of Hamilton, NJ; Daniel Caffarello and fiancee Kelly Sibree of Langhorne, PA. Dave is also survived by six siblings; Thomas Albrecht of TX, John Albrecht of ME, Deb Albrecht of ME, Robert Albrecht of VT, Steven Albrecht of VT, James Albrecht of MD. A time to celebrate Dave’s special life will be shared at a later date. Dave loved his home at Cross Keys Village. If you would like to make a donation in his memory, please send to the Good Samaritan Fund ℅ Brethren Home Foundation, 2990 Carlisle Pike, New Oxford, PA 17350.

The family of David S. Albrecht created this Life Tributes page to make it easy to share your memories.

Send flowers to the Albrecht family.