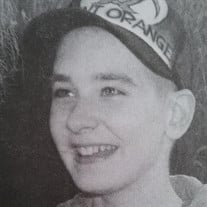 Connor Joseph Goonan, 12, of East Berlin, was carried away on angel wings, surrounded by his loving crusaders and family on Monday, November 12, 2018, after a courageous year of battling cancer. Born on Tuesday, April 25, 2006 in Gettysburg, he is a son of Tim L. and Becky A. Rio Goonan and big brother to Daniel and Irelyn. Connor was a home schooled seventh grader with an enormous love for Jesus. He took great pleasure in playing football, baseball and riding his bike. Following in his father’s footsteps, he earned his black belt in karate. Connor especially enjoyed camping on the river in the Shenandoah Valley, The Avengers, Batman, Thanksgiving and the color green. He was most excited with the anticipation of Christmas as it was his favorite holiday. A special and precious time for Connor and his Pop-Pop was when they spent together fishing. In addition to his parents, brother and sister, Connor is survived by his maternal grandmother, Anna Reuter of Littlestown; paternal grandparents, Joe M. Goonan, Sr. and Donna Dice Goonan of Wesminster; uncles, Joseph M. Goonan, Jr. and his wife, Carey, Josh T. Rio and his wife, Roxanne, and Jake V. Rio and his wife, Jessica; and an aunt, Sarah M. Rio; first cousins, Skylar, Zachary, Camy, Andrew, Trevor, Aubrey, Houston and Thatcher. He is also survived by additional uncles, aunts, numerous cousins and many friends. The funeral will be held at 1 PM Saturday, November 17, 2018 at the Bethel Assembly of God, 1125 Frederick Pike, Littlestown. Entombment will follow in the Rest Haven Cemetery Mausoleum. In lieu of flowers, memorial contributions may be made to Caring for Connor, c/o First Baptist Church, P.O. Box 463, Littlestown, PA 17340.

Connor Joseph Goonan, 12, of East Berlin, was carried away on angel wings, surrounded by his loving crusaders and family on Monday, November 12, 2018, after a courageous year of battling cancer. Born on Tuesday, April 25, 2006 in Gettysburg,... View Obituary & Service Information

The family of Connor Joseph Goonan created this Life Tributes page to make it easy to share your memories.

Connor Joseph Goonan, 12, of East Berlin, was carried away on...

Send flowers to the Goonan family.