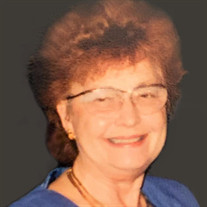 Betty Virginia Topper Busler, 93, of Hanover, entered into God’s eternal care on Sunday, January 23, 2022 at SpiriTrust Lutheran – The Village at Utz Terrace. Born on Tuesday, October 28, 1928 in Middletown, MD, she was a daughter of the late Roy C. and Naomi Sines Adkins. She was also preceded in death by her first husband, Lloyd E. Topper, who died in 2011, her second husband, Dr. Verne M. Busler, Jr., who died in 2016; a granddaughter, Kelsey Birgensmith, who died in 2018; and her brothers and sisters. Betty was a member of St. Paul’s Lutheran Church on York Street, served as a Docent at the Warehime-Myers Mansion. She worked for many years as a Ward Clerk at the Hanover Hospital and was an owner of Bressler’s Ice Cream in the North Hanover Mall. Survivors include two daughters, Lori Toth and her husband, Bill, of East Berlin and Kimberly Birgensmith of Hanover; two sons, Dennis Topper and his wife, Irma, of Richmond, VA and Troy Topper and his wife, Dawn, of Alexandria, VA; seven grandchildren, Jared Topper, Dylan and Payton Caler, and Tyler, Katlyn, Kiley and Teryn Birgensmith; a great-granddaughter, Miranda Topper; and three step-sons and their families, Michael Busler and his wife, Angela, of Inverness, FL, David V. Busler and his wife, Deborah, and Steven J. Busler all of York. A funeral will be held at 10:00 AM Saturday, January 29, 2022 at St. Paul’s Lutheran Church, 127 York Street in Hanover with The Rev. E. Robert Burkhart officiating. Entombment will follow in Rest Haven Cemetery. The family will receive friends at a viewing from 6 to 8:00 PM Friday at Panebaker Funeral Home, 311 Broadway, Hanover. In lieu of flowers, memorial contributions may be made to the Alzheimer’s Association, 2595 Interstate Drive-Suite 100, Harrisburg, PA 17110.

The family of Betty V. Busler created this Life Tributes page to make it easy to share your memories.

Send flowers to the Busler family.