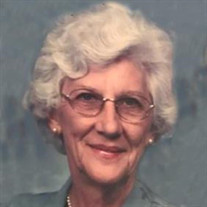 Bernice Beryl Beavin, 87, of Westminster, MD and formerly of Hanover, entered into God’s eternal care on Thursday, March 25, 2021 at the Dove House of Carroll Hospice in Westminster. Born on Monday, November 20, 1933, in Cullowhee, N.C., she was a daughter of the late James B. and Laura Taylor Pressley and wife of Paul Beavin, Jr., her husband of 62 years, who died in 2021. The oldest of seven siblings, she was also preceded in death by a sister, Rachel Pressley; and a brother, Herbert Pressley. Bernice received her Bachelor of Arts degree in Chemistry from Berea (KY) College. While working as a chemist for the Food and Drug Administration in Cincinnati, OH, she met her future husband, Paul. She continued to work for the FDA for many years, but took time from her job to be a full time mother in Michigan and later Maryland, rearing their boys in the 1960’s and 70’s, returning briefly to the FDA in the late 1980’s. She was a member of St. John Roman Catholic Church in Westminster and was a member of St. Joseph Catholic Church in Hanover. Bernice dabbled in photography and donated many pictures to the Hanover Arts Guild, of which she was a member. She loved to garden and make her home the center of family gatherings. Survivors include three sons, Phil Beavin and his wife, Crystal, of Lewisville, TX, Jeff Beavin and his wife, Linda, of Finksburg, MD, and Tom Beavin and his wife, Kelli, of Thurmont, MD; 12 grandchildren; one great-grandson; two brothers, Densil Pressley, of Glen Burnie, and Ronald Pressley and his wife, Carol, of Cullowhee, NC; two sisters, Marjorie Moody and her husband, Dan, of Cullowhee, NC, and Geneva Wilson, of Asheville, NC; and several nieces and nephews. A Mass of Christian Burial will celebrated at 1PM on April 10, 2021 at St. Joseph Catholic Church in Hanover by The Rev. Msgr. James M. Lyons. Burial will follow at Mount Olivet Cemetery in Hanover. In compliance with health and public safety directives, those attending will be required to wear masks and be socially distanced. Memorial contributions may be made to St. Joseph Catholic Church, 5055 Grandview Road, Hanover, PA 17331.

The family of Bernice B. Beavin created this Life Tributes page to make it easy to share your memories.

Bernice Beryl Beavin, 87, of Westminster, MD and formerly of...

Send flowers to the Beavin family.