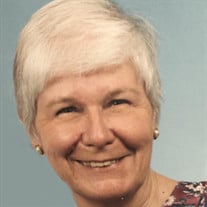 Beatrice “Jean” Calder, 87, of Hanover, entered into God’s eternal care on Wednesday, April 3, 2019 at Hanover Hall Nursing Center. Born on Tuesday, December 15, 1931 in Brooklyn, NY, she was a daughter of the late William Patrick Foley and Beatrice Rita Tait Foley and wife of 55 years to the late Robert Edward Calder, who died in 2007. She was also preceded in death by an infant son, Michael Tait Calder and a daughter, Nancy Jean Calder. Beatrice began her nurses training at the University of Pennsylvania before earning her degree at the Delaware County Community College. She was a registered nurse at the Norristown State Hospital and Doylestown Hospital, later became a supervisor at the Horsham Clinic. She was a member of St. Vincent dePaul Church and was an avid reader belonging to various reading clubs. Survivors include her six children, Linda J Buettner of Hanover, Robert E. Calder and his wife, Nancy of Columbia, MD, Geraldine Fiore of Hanover, Dr. Terrence M. Calder and his wife, Mary Beth of Hanover, Carolyn Leskinen and her husband, Daniel of Smith Mills, KY, and Maureen E. Calder, Esq. of Glen Mills; 14 grandchildren; eight great-grandchildren; and a sister, Eileen Meyle of Lancaster. A Mass of Christian Burial will be celebrated at 11 AM on Monday, April 8, 2019 at St. Vincent dePaul Church, 220 Third Street, Hanover by The Rev. Michael P. Reid, II. The family will receive friends one hour prior to the service. In lieu of flowers, memorial contributions may be made to the National Alliance on Mental Illness (NAMI), 3803 N. Fairfax Drive – Suite 100, Arlington, VA 22203.

The family of Beatrice "Jean" Calder created this Life Tributes page to make it easy to share your memories.

Send flowers to the Calder family.