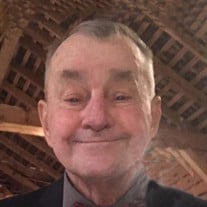 Barry J. Sease, 76, of Gettysburg, peacefully entered into God’s eternal care on Tuesday, March 15, 2022 at his daughter’s home surrounded by his loving family. Born on Monday, February 4, 1946 in Gettysburg, he was a son of the late John E. Sease and Chester A. and Verna M. Stover. A 1965 graduate of Gettysburg High School, Barry proudly served his country in the Pennsylvania National Guard while in high school, and served in the US Air Force during the Vietnam War. For more than 35 years, he protected and served the citizens of Adams County as a police officer and later retired as police chief of Cumberland Township, a position he held for many years. Dedicated to his chosen profession, he continued his career as a Senior Law Enforcement Professional, serving two tours of duty in Afghanistan as an instructor for the Afghan National Police, and was also a volunteer with the Gettysburg Fire Department. Barry was a lifetime member of St. James Lutheran Church in Gettysburg and was a member of the National Police Chiefs Association, serving as past president of the Adams County Chapter, the Fraternal Order of Police, and the Albert Lentz American Legion Post #202. Barry enjoyed learning about military history, being outdoors while hunting and fishing and singing, playing guitar and performing for others. An avid sports fan, he closely followed the Baltimore Orioles and Penn State football, but his greatest pleasure was spending time with his family. Survivors include four children, Sean Sease and his wife, Kathy, and Stephen Sease, all of Gettysburg, Joseph Mickley and his wife, Jessica, of Fort Campbell, KY, and Kristin Voigt and her husband, Timothy, of Thurmont, MD; four grandchildren, Joseph, Tyler and Cody Mickley, and Kendall Sease; and his beloved “grand-dogs”, Tinkerbell, Sam and Arlo. In addition to his parents, he was also preceded in death by his brother, Ken Sease. A celebration of Barry’s life will be held at 2:00 PM on Saturday, April 9, 2022 at ThorpeWood, 12805-A Mink Farm Road in Thurmont, MD. In lieu of flowers, memorial contributions may be made to the Albert Lentz American Legion Post #202, 25 S. Fourth Street, Gettysburg, PA 17325 or to the Fraternal Order of Police, 701 Marriott Drive, Nashville, TN 37214 or by visiting https://nfop.firstresponderprocessing.com/

The family of Barry J. Sease created this Life Tributes page to make it easy to share your memories.

Send flowers to the Sease family.