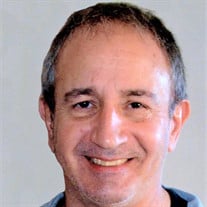 Anthony B. “Tony” Klunk, 63, formerly of Hanover, peacefully entered into God’s eternal care on Saturday, March 27, 2021. Born on Friday, December 31, 1957 in Hanover, he was a son of the late Lawrence and Geraldine Hufnagle Klunk. A 1975 graduate of Delone Catholic High School, he was employed by the Stihl Corporation for more than 20 years. Tony enjoyed birdwatching, horticulture and working in his yard, doing home improvement projects, reading and playing golf. He also had a passion for astronomy, music, collecting CD's and going to various concerts, but his greatest joy was spending time with his family and friends. Survivors include his daughter, Billie Hagan and her husband, Justin; a grandson, Elliott Hagan; two brothers, Greg and Larry Klunk, and brother-in-law, Steve Neiderer; four sisters, Vicki Hamlin, Lida Klunk, Georgi Saulpaugh and Kim Pightling; and numerous nieces and nephews. In addition to his parents, he was also preceded in death by two sisters, Barbara and Becky; and two nephews, Mark and Michael. A service to celebrate Tony’s life will be held at a later date. In lieu of flowers, memorial contributions may be made to the American Heart Association, PO Box 840692 Dallas, TX, 75284.

The family of Anthony B. "Tony" Klunk created this Life Tributes page to make it easy to share your memories.

Send flowers to the Klunk family.