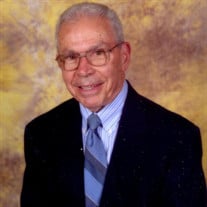 Allison J. Mayhew III, formerly of Dillsburg and husband of Elaine Mayhew, passed away on May 20 at the age of 87 at Cross Keys Village in New Oxford, PA after battling Alzheimer’s Disease in last years of his life. Born in Harrisburg, Allison spent his early years in Highspire, PA and was the son of Allison J. Mayhew Jr. and Margaret Horton Mayhew. Allison graduated from Highspire High School at 16. From there he earned a B.S. Degree in Agronomy at Penn State University. After four years of ROTC training, he became a 2nd Lieutenant and served two years in the US Air Force at Elmendorf Air Force Base in Alaska. After returning home to Highspire, he spent three years as a material laboratory technician for the construction of the Harrisburg International Airport runway and various federal buildings. Subsequently, he was employed with the Pennsylvania Civil Service Commission, the Health Department, and the Governor’s Office of Administration as Chief of Pay and Benefits for all state employees. Allison completed his last 13 years of state service with the Pennsylvania Fish and Boat Commission as the Director of the Bureau of Administrative Services. In retirement, Allison and Elaine completed bicycle tours throughout the U.S. and Canada. Interests included fitness, biking, hiking, gardening, and watching sports, especially his grandkids’ games. One of Allison's greatest achievements was designing and building his family's home of 46 years on a large plot of farm land near Dillsburg, Pennsylvania. He and his wife laid out the half mile private lane and lived on-site in their mobile home during construction. The home was designed utilizing many of Frank Lloyd Wright’s characteristic elements and incorporated a mono-slope roof, floor-to-ceiling windows, interior and exterior wood paneling and siding, stone, and numerous built-in features such as fieldstone planters, a stone fireplace, and built-in cabinetry throughout.. Many years were spent planting trees originally seeded in the 1950’s by his wife as a 4-H project and planting his favorite rhododendron. Here they raised their twins. Surviving is his wife of 57 years, Elaine Mayhew, his brother Jonathan (Donna) of Harrisburg, and his children, Michelle Smith (Jeffrey) of York and Stephen Mayhew (Sonja), of Bloomington, MN. Grandchildren include Sierra and Parker Smith and Keaton and Gavin Mayhew. A celebration of Allison’s life will be arranged by the family. Donations in his name may be made to the Sierra Club, National Parks Foundation, Planned Parenthood, or the Alzheimer’s Association.

Allison J. Mayhew III, formerly of Dillsburg and husband of Elaine Mayhew, passed away on May 20 at the age of 87 at Cross Keys Village in New Oxford, PA after battling Alzheimer&#8217;s Disease in last years of his life. Born in Harrisburg,... View Obituary & Service Information

The family of Allison J. Mayhew III created this Life Tributes page to make it easy to share your memories.

Send flowers to the Mayhew family.