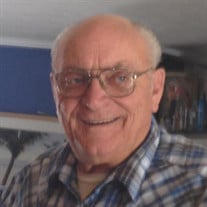 Albert Maurice “Junior” Turnbaugh, Jr., 76, of York, loving fiancé of Darlene M. Bowers, passed away after a brief battle with cancer on Monday, November 26, 2018. Born on Sunday, January 4, 1942 in Baltimore, he was a son of the late Albert Maurice Turnbaugh, Sr. and Rose May Diehl Turnbaugh. Al was the owner of A. M. Turnbaugh Trucking for more than 30 years and was a member and past president of the Littlestown Fraternal Order of Eagles Aerie #2226. Al was a volunteer firefighter for many years at Owings Mills Volunteer Fire Department. He enjoyed trucking, he also loved his tractors and collecting Hess Toy Trucks. Al always had a great time camping in Gettysburg campgrounds and was a fan of Western movies and TV shows such as Gunsmoke, Bonanza and Big Valley. Al is survived by his fiancée, Darlene M. Bowers; eight daughters, Bonnie, Barbara, Valerie, Pamela, Charlene, Michele, Sharon and Kimberly; six grandchildren; six great-grandchildren and several nieces and nephews. He is also survived by his fiancées children, Katie and Matthew and her two grandchildren. He is preceded in death by one son, Albert M. “Boomer” Turnbaugh, III and three siblings. Following cremation, a memorial service will be held at 2 pm Saturday, December 1, 2018 at the Fraternal Order of Eagles Aerie #2226, 427 Mengus Mill Rd., Littlestown, PA 17340. Memorial contributions may be made to Fraternal Order of Eagles Aerie #2226 at the address above.

The family of Albert Maurice Turnbaugh Jr. created this Life Tributes page to make it easy to share your memories.

Send flowers to the Turnbaugh family.