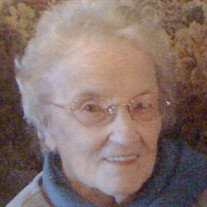 Agnes C. Kale, 97, of Hanover, entered into God’s eternal care on Tuesday, December 3, 2019 at Spiritrust Lutheran – Village at Shrewsbury. Born on Friday, February 24, 1922, she was a daughter of the late Lawrence and Mary Small Livelsberger. She was also preceded in death by her husband of 38 years, Joseph L. Kale, who died in 1977; a daughter, Kathryn Grove; brothers, Ralph, John and Thomas Livelsberger; and two sisters, Mary Jane Keffer and Anna Bevenour. Agnes was a graduate of the former Central Catholic High School and retired after serving many years as the secretary at St. Joseph Catholic Church where she was also a longtime member. Gifted with her hands, she made clothing for her children and also enjoyed knitting, crocheting and playing cards. Survivors include her four children, Joseph L. Kale, Jr. and his wife, Loretta, of Spring Grove, Michael A. Kale and his wife, Joanne, of Hanover, Rosemary Kale of Huntingdon, and Robert F. Kale of Essex Junction, VT; 16 grandchildren, Timothy, Karen, Christine, Thomas, Tony, Steve, Matt, Jenn, Angie, Michael, Joseph, Travis, Jason, Teresa, Elizabeth and Dan; several great-grandchildren; a brother, William Livelsberger of Norristown; and numerous nieces and nephews. A memorial Mass will be celebrated at 11 AM Monday, December 9, 2019 at St. Joseph Catholic Church, Hanover, by The Rev. Msgr. James M. Lyons. Burial will follow in St. Joseph Cemetery. The family will receive friends at the church one hour prior to the service. In lieu of flowers, memorial contributions may be made to St. Joseph Catholic Church, 5055 Grandview Road, Hanover, PA 17331.

The family of Agnes C. Kale created this Life Tributes page to make it easy to share your memories.

Send flowers to the Kale family.